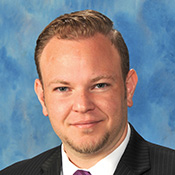 Joseph W. Melendez-Davidson, MD, a general and bariatric surgeon, earned his medical degree in 2009 from the Ponce School of Medicine in Puerto Rico. He then completed his general surgery residency with his first year at Mount Sinai Medical Center in New York, his second year at the University of Florida Medical Center in Gainesville, and his final three years at the University of Alabama at Birmingham, where he served as chief resident. Following his one-year fellowship in Advanced Minimally Invasive and Bariatric Surgery at Cleveland Clinic Florida, Dr. Melendez-Davidson joined Memorial Healthcare System in 2015.

Dr. Melendez-Davidson offers a multidisciplinary approach to weight loss, and he is an integral part of Memorial’s exceptional team of surgeons, who help and support patients as they move in a long-term, strategic fashion toward healthier lives. In addition to bariatric surgery, Dr. Melendez-Davidson performs general surgery procedures such as hernia repair.